Authentic Buddha Dharma that is Irrefutable and Scientifically Incontrovertible

Originally reported by Jiang Qing in U.S. Headline News –  “Lifting the Pestle onto the Platform,” a test for verifying Buddhist practitioners’ realization power, has overturned a thousand-year-old belief that those who had left footprints in rocks were Holy Gurus. The fact is no one ever witnessed in person the foot impressions actually being made on the rocks by the feet of people who purported to be Holy Gurus. They could very well have been manually chiseled. Recently, however, an awe-inspiring event actually occurred and was witnessed: Kaichu Rinpoche, a Buddhist elder approaching 90 years of age, demonstrated the fact that by practicing authentic Buddha Dharma, one can attain a holy constitution with holy tendons and bones. He outperformed a Champion Strongman of Asia when “Lifting the Pestle onto the Platform.” 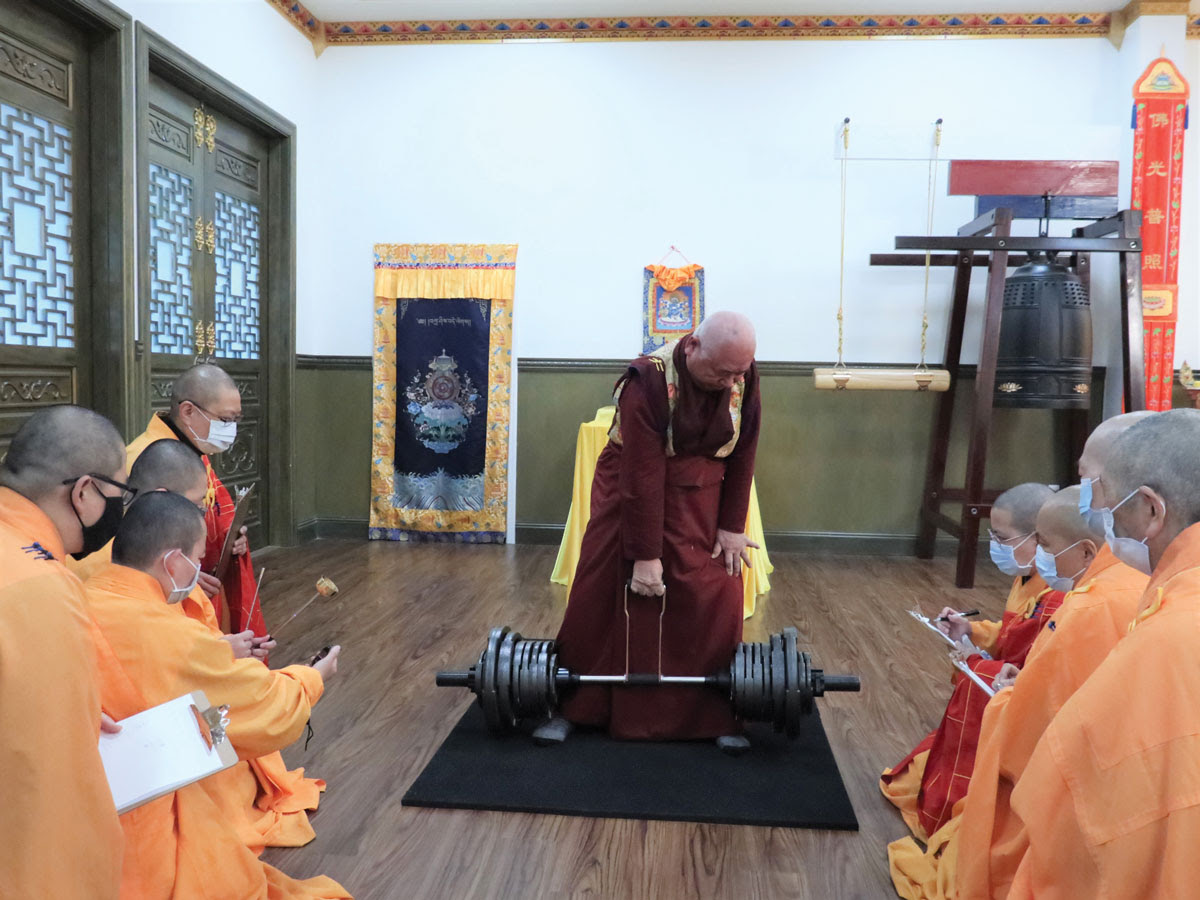 Kaichu Jiaozun lifted a Pestle at a weight 26 levels above his base weight standard.

Lv Xiao is a professionally trained strongman who represented China in a Strongman competition in Kuala Lumpur, Malaysia in 2014. He competed against participants from seven countries and won the Asian Strongman Championship. In December 2019, he performed “Lifting the Pestle onto the Platform” in Shenyang. Being the strongest man in over 3 billion people in all of Asia, he was unable to lift the Vajra Pestle at the same weight that Elder Kaichu did. More importantly, their ages and body weights were starkly different, and their performances were totally disproportional in comparison.

Lv Xiao is 36 years old and weighed 350 pounds. Elder Kaichu is 89 years old and weighed 178 pounds. Lv Xiao is a strongman by profession and has undergone long-term training. Elder Kaichu, on the other hand, has never done any strength training. All he does on a daily basis is learn from Buddha to cultivate his own conduct. Just recently, the weight of the Pestle Elder Kaichu lifted was 26 levels above his base weight standard. No one nor any Buddhist of the same age and weight class in this world has ever been able to attain Elder Kaichu’s holy physical power. Jin Yanping and Tsui Lei Tat in Hong Kong made it publicly known through news media that they have set up an award of US$5 million for anyone who successfully matches the weight level that the Elder Kaichu achieves.

Many strongmen have attempted to perform the lift. Yet up to now, no one is able to match the 26 levels that Elder Kaichu has achieved in surpassing his own base weight standard. Elder Kaichu said, “The reason I am able to accomplish both Tummo and Vajra Dharma is that I have learned true Buddha Dharma transmitted by His Holiness Dorje Chang Buddha III. As a result, my physical body, bones, and tendons have transformed from ordinary to holy. I used to be very weak and sickly. I had stomach disease, diabetes, knee problems, gout, and was so weak that I couldn’t even lift 10 pounds. All my illnesses have now vanished.” 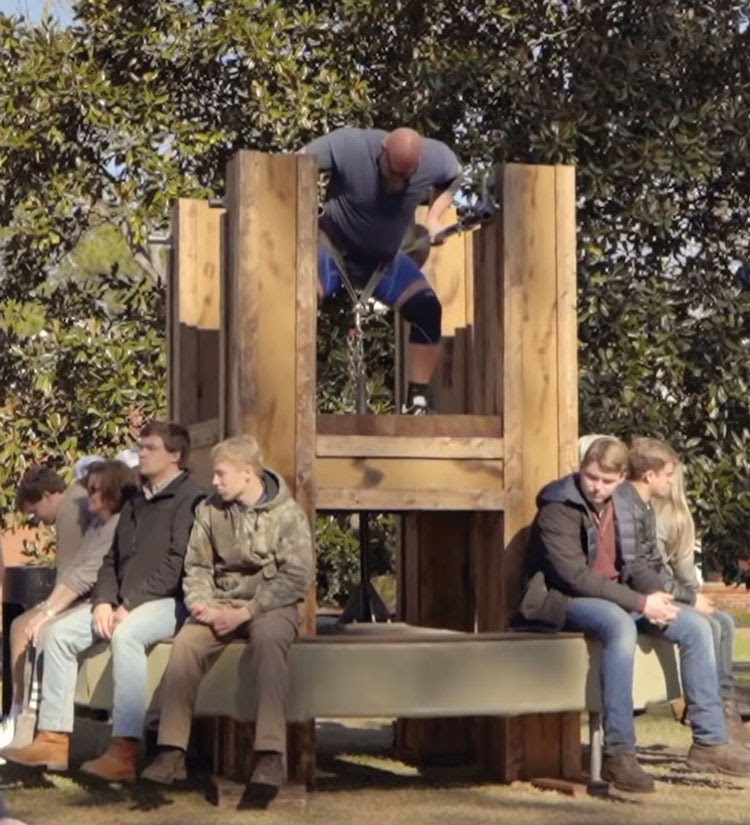 Nick Best, the world’s “Grandfather of Strongmen,” has set a strength record that nobody of the same age and weight class has ever been able to reach throughout human history.

He once lifted a human carousel of 2,791 pounds in the State of Georgia. Not one of the several “Strongest Men in History” present, who were younger in age and heavier in body weight than him, was able to lift the same. Nick Best is known as the “Grandfather of Strongmen.”

In his reply to an attorney’s question, he said, “I have cultivated and studied the real Buddha Dharma under Namo Dorje Chang Buddha III. The Buddha Dharma greatly altered the composition of my body, as well as my mind and spiritual state. My strength utterly changed. Namo Dorje Chang Buddha III is my Buddha Master to whom I owe the utmost gratitude. I am able to teach the physical training involved in becoming a strongman.

However, that alone will not enable you to reach my level. My strength also derives from the blessings of Buddha Dharma.” He also stated that Buddha Dharma cannot be transmitted lightly.

This is a factual conclusion that can be deduced by rational thinking. In history, Shakyamuni Buddha manifested miraculous power in Rajgir when holding a stone lion, outperforming all powerful strongmen. When Guru Padmasambhava was challenging the Shenrab Miwoche lineage, he manifested the power of Vajra Zhaoji to perform “Lifting the Pestle onto the Platform” with a Vajra hook, thereby subjugating the Bon practitioners. If anyone claims that their Buddha Dharma is authentic and that they hold true Buddha Dharma, yet in reality, their physical constitution and strength are no different than that of an ordinary person, can they possibly be considered as having attained realization power? Could it be possible that one who derives realization power from practicing Buddha Dharma cannot even demonstrate a whit of extraordinary physical strength? 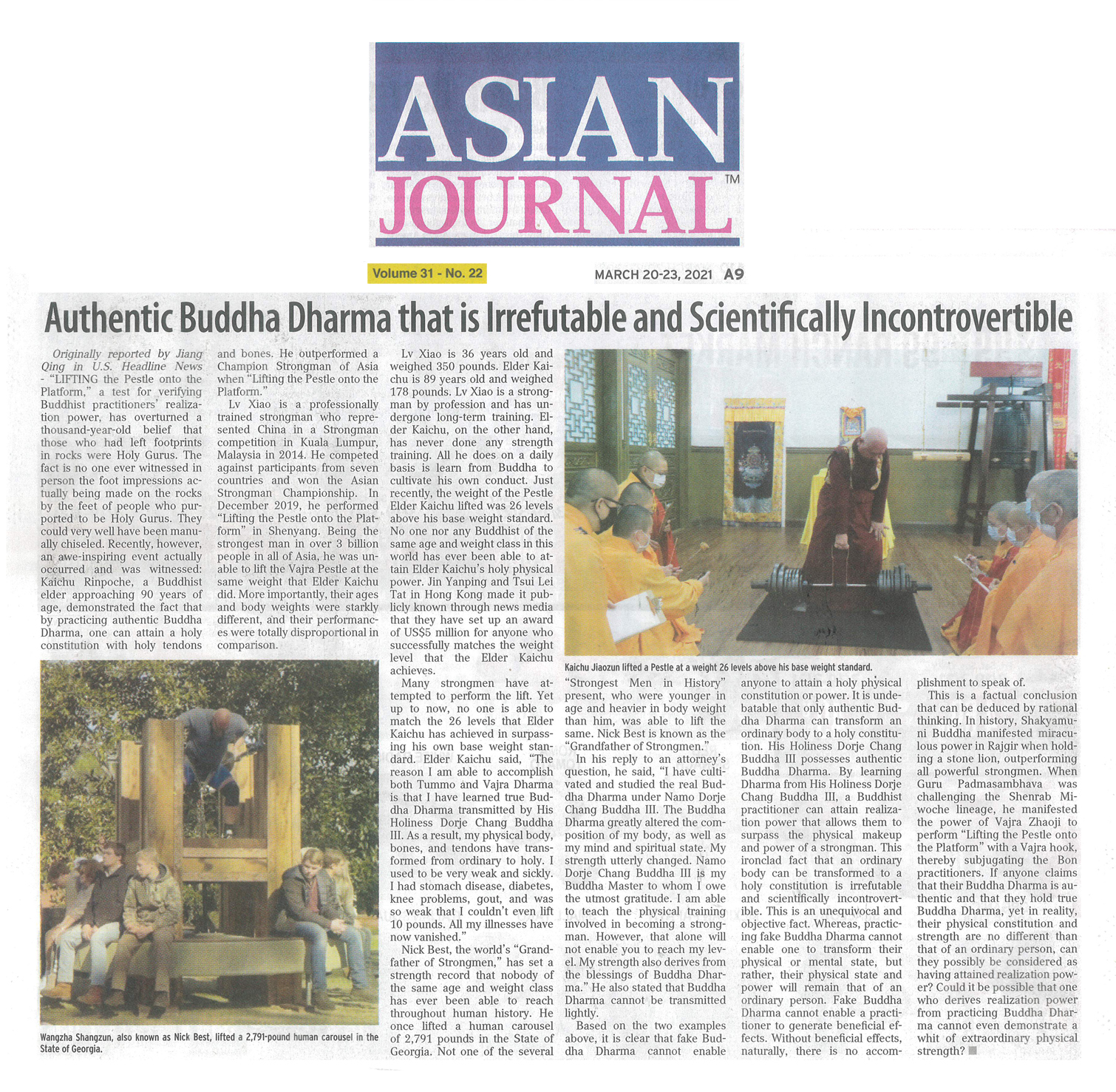 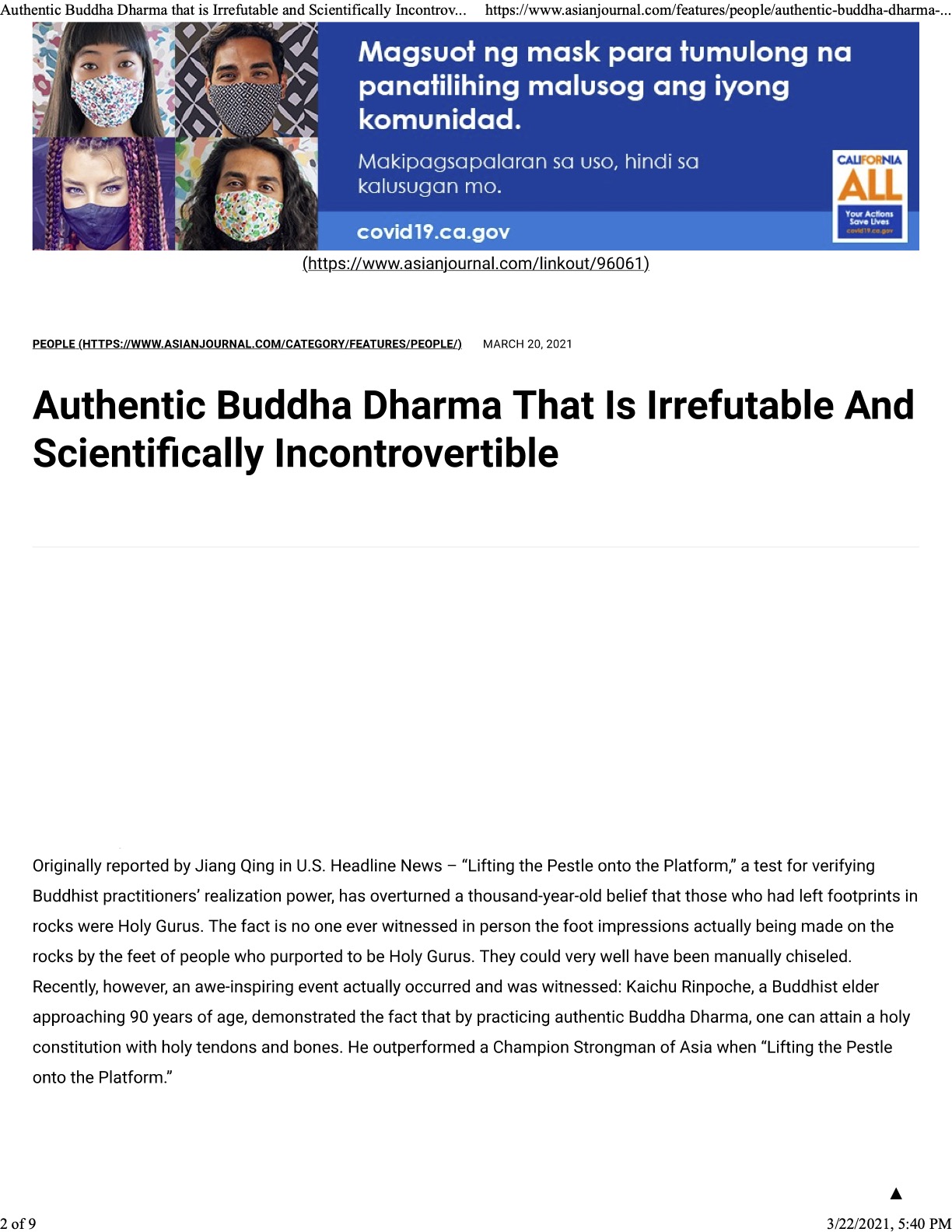 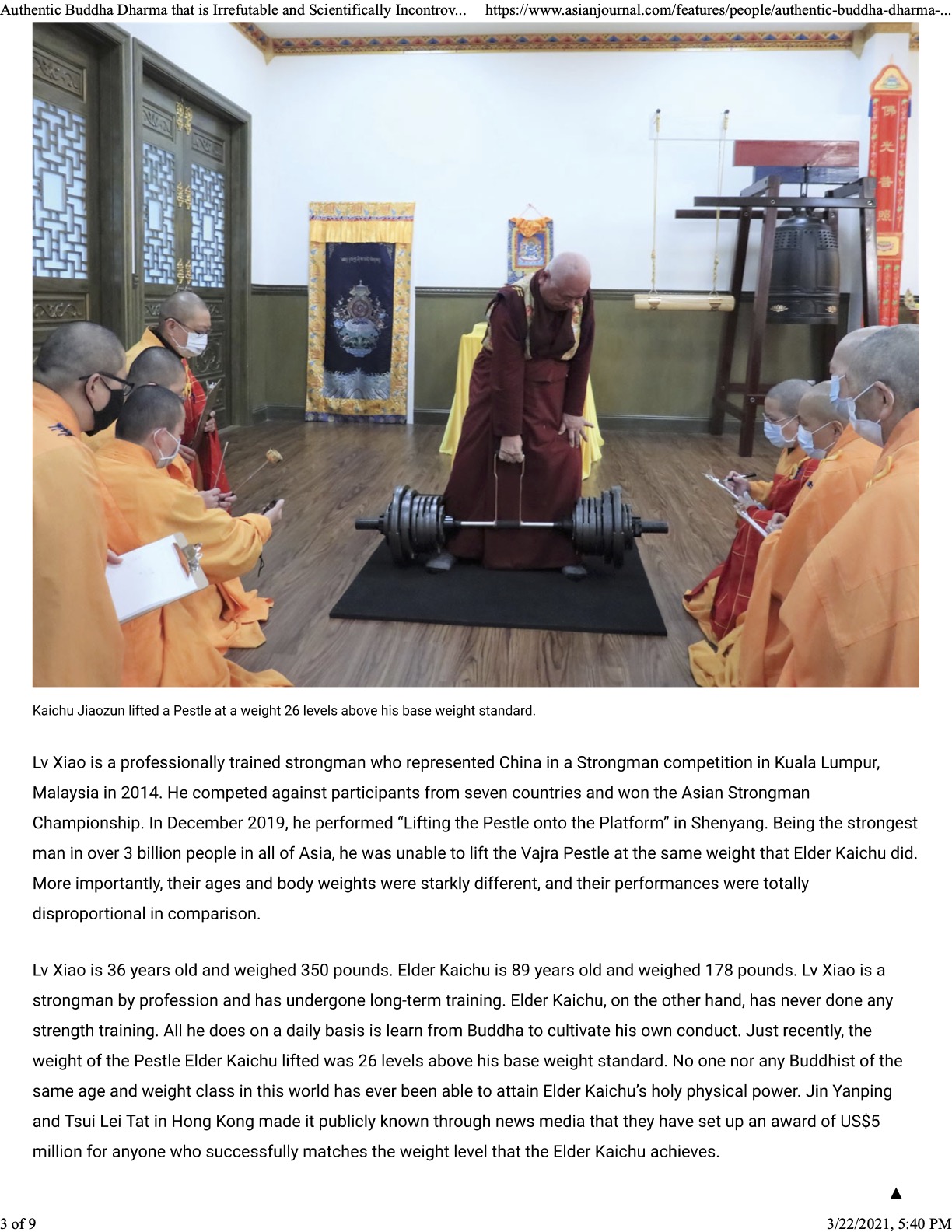 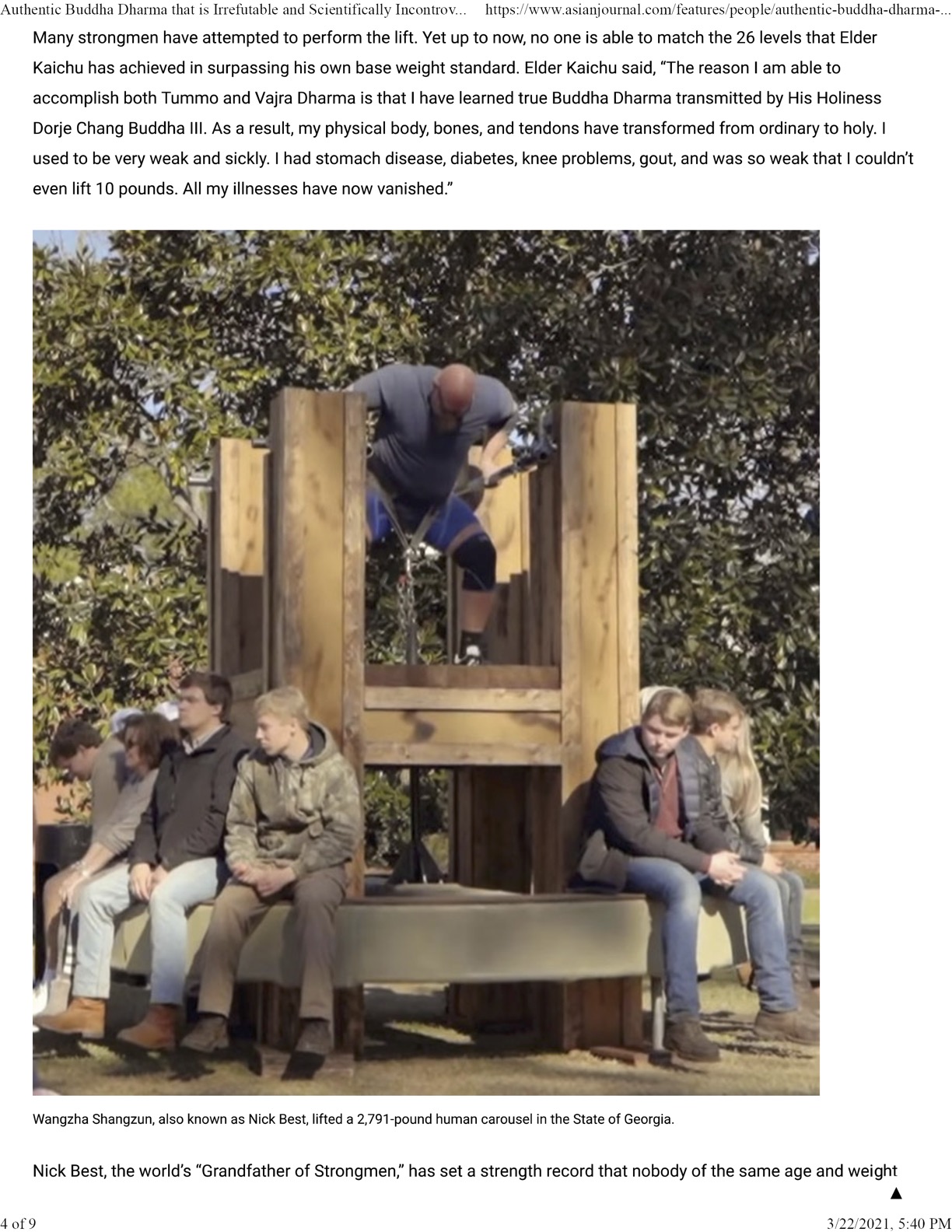 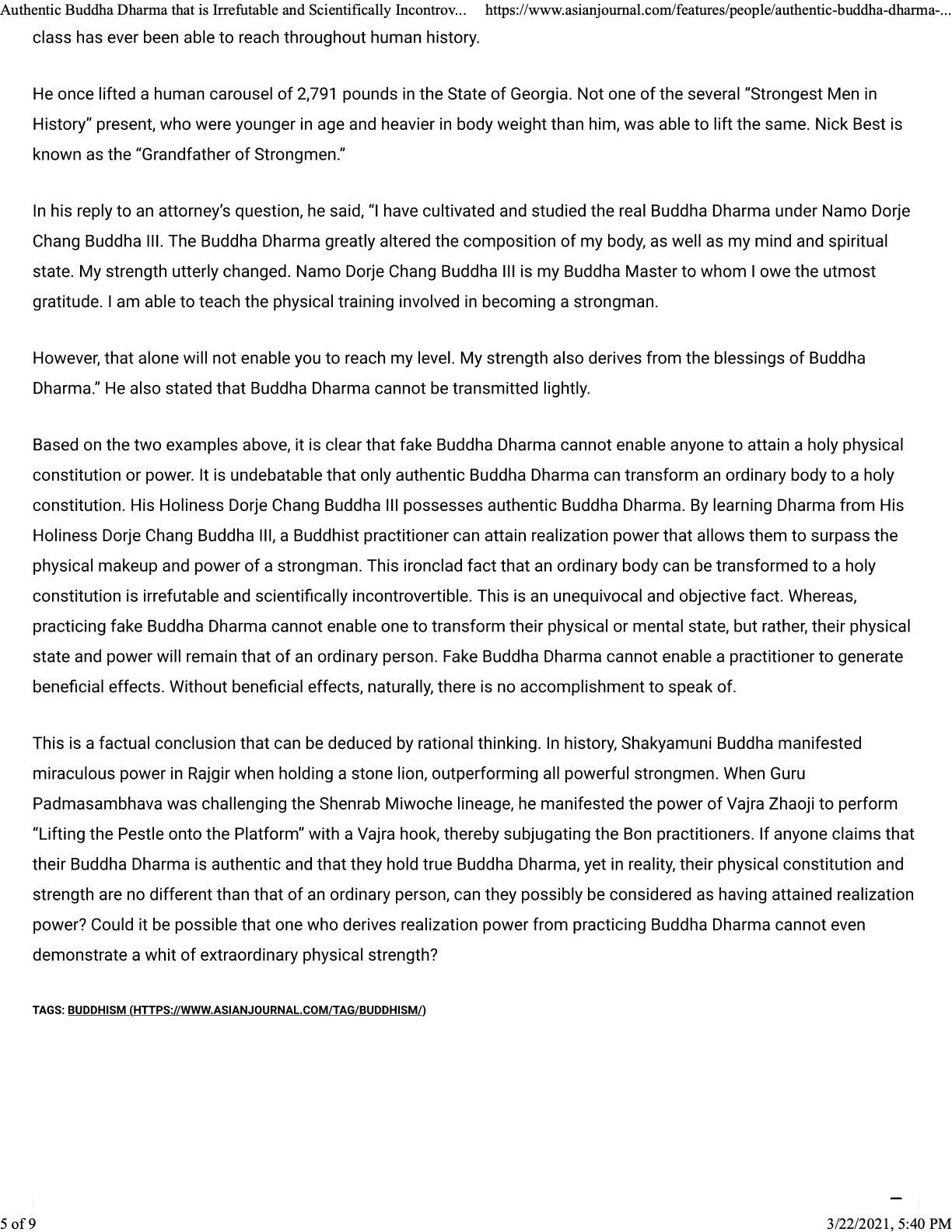