A Holy and Virtuous One Attained Accomplishment through Buddhism;

【Reported by Huarenone News Agency from Los Angeles】Nearly 200 dharma masters, rinpoches, monastics, and laypersons from several dozens of Buddhist temples and organizations within and outside of the USA gathered at the chapel of Rose Hills Memorial Park located at Alhambra in the morning of September 2, to hold a grand memorial dharma assembly for Layperson Zhao Yusheng, who attained the accomplishment of a holy and virtuous one through learning the true dharma of the Tathagata. The Buddhist disciples of seven types together chanted respectfully The Buddha Speaks of the Amitabha Buddha Sutra to dedicate the merit to Layperson Zhao Yusheng. The dharma assembly proceeded in a very solemn and majestic atmosphere. 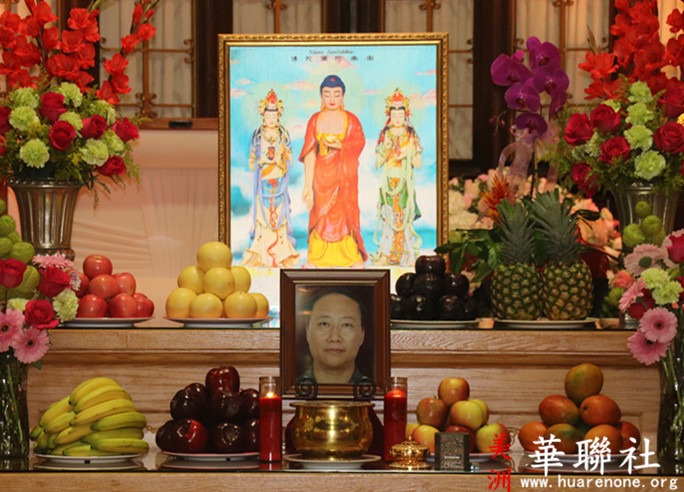 In the introduction, the Chief Abbess of the International Buddhism Sangha Association, Dharma Master Shi Zhengda, who just traveled from mainland China via Taiwan to Los Angeles to attend this memorial dharma assembly held for Layperson Zhao Yusheng, mentioned that Layperson Zhao Yusheng was once a disciple of a man with the last name of Chen. Because he had not learned any Buddha-dharma from this Mr. Chen and instead erred on causality in many circumstances, he became very sick and the illness turned more and more serious. Therefore, he was in great pain and suffered very much. He came to the United States on June 27. That enabled him to learn the true dharma of the Tathagata.

Dharma Master Shi Zhengda told the audience that, on the same day of June 27, Layperson Zhao Yusheng had the good fortune to receive a holiest great dharma transmitted to him by H.H. Dorje Chang Buddha III, the supreme leader of Buddhism in the world. Amitabha Buddha was invited to come to the mandala, manifesting in the Buddha’s 32 great appearances and emitting endless light rays from the Buddha’s body. Amitabha Buddha touched Layperson Zhao’s head and gave him a prophecy in person, telling him that Kuan Yin Bodhisattva would be sent to receive and escort him to the Western World of Ultimate Bliss. (Zhao Yusheng had put his personal experience of this event into writing, which was already published on the internet.) On August 24, Zhao Yusheng passed away and reached liberation. The holy state manifested when he followed Kuan Yin Bodhisattva to go to the World of Ultimate Bliss was witnessed by those who were present at the scene.

Dharma Master Shi Zhengda pointed out that getting such an outcome is the most joyful thing to all of us Buddhist disciples. Layperson Zhao Yusheng was able to learn and accomplish the true dharma of the Tathagata and become a holy and virtuous one of Buddhism in less than two months. This is what we should be happy about him. She hoped that Buddhist disciples as well as living beings can all learn the true dharma of the Tathagata and truly follow the teachings of H.H. Dorje Chang Buddha III and Sakyamuni Buddha to cultivate themselves and to remove evil and pursue goodness.

Dharma Master Shi Ruo Hui, the Abbess of Hua Zang Si described the situation when Layperson Zhao Yusheng passed away and reached liberation. On that day, the sky was completely clear without any cloud and the hot sun was shining intensely. At the time, they stood under the trees and saw nectar descending down like snowflakes. When drops of nectar touched one’s face and body, the feeling was extremely refreshing and cool. They were all very delighted. At the same time, they felt happy and gratified for Layperson Zhao. This is because, only after Layperson Zhao Yusheng had begun to follow H.H. Dorje Chang Buddha III, did he attain such great accomplishment and did so many auspicious and celebrated phenomena appear. This is truly a very happy and gratifying event.

Layperson Bee Bee Moh said that, after receiving the dharma and returning to San Francisco, Layperson Zhao Yusheng practiced the dharma every day. Before passing away, Brother Zhao told her that he was about to leave. She helped Brother Zhao to put on the prepared clothing. She said that she was greatly astounded at the time. The Brother left right after saying so. That is truly the freedom from birth and death!!! She and Zhao Chen smelled a special fragrant scent from the Brother’s body. Next, the Brother said, “I will now use my freedom from birth and death to prove that the Buddha-dharma of H.H. Dorje Chang Buddha III is the holiest. Chen Baosheng is a demonic devil and demonic evildoer! He is an evil master, big swindler, and a person of sin!” He also said, “The true dharma of the Tathagata is at where our great Buddha Master, H.H. Dorje Chang Buddha III, is. Okay, okay, I will stop now. Namo Kuan Shi Yin Bodhisattva has come to receive me!” Layperson Bee Bee Moh spoke about the scene she saw, “At that time, he emitted light from his entire body. I saw the extremely tall and great Kuan Shi Yin Bodhisattva, radiating strong and intense white light everywhere from His body. Surrounded by five-colored light, Namo Kuan Shi Yin Bodhisattva was extremely solemn and majestic, standing above the top of Brother Zhao’s head. At this time, I saw that Brother Zhao’s spiritual consciousness, dressed in splendid white clothing and emitting light from the entire body, rushed out from the top of his head toward Kuan Shi Yin Bodhisattva and left in the sky! A neighbor who is an elder lady from Malaysia also saw this scene. She also talked about how the nectar dripped down. The white-colored nectar immediately disappeared after dropping to the ground.” 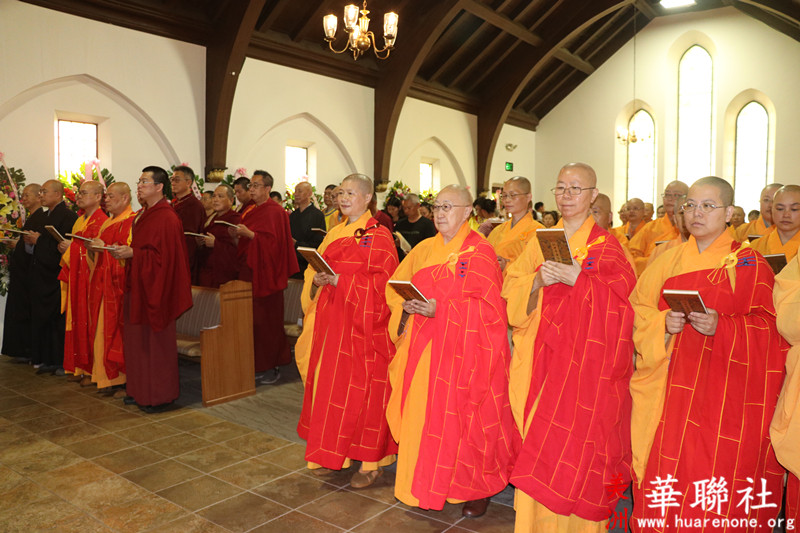 Layperson Zhao Chen said that, as the daughter, she was very surprised when seeing her father leaving right after saying so! However, seeing the holy state of her father following Kuan Yin Bodhisattva to ascend to the World of Ultimate Bliss and nectar coming down from the sky, she was very delighted and joyful. She also said that her father’s body emitted fragrant scent from time to time after passing away. She had never smelt that kind of body fragrance before. That also belongs to the outcome from her father’s perfection of cultivation. Bee Bee Moh and Zhao Chen witnessed with their own eyes this extremely solemn and magnificent holy state and also felt boundless dharma joy for Layperson Zhao Yusheng’s great accomplishment of ascending to the Western World of Ultimate Bliss and becoming a holy and virtuous one!

After the dharma assembly had concluded perfectly, all attendees escorted Layperson Zhao Yusheng’s body of accomplishment to the Rose Hills Memorial Park to be buried there.